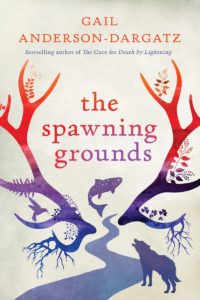 Congrats to internationally bestselling author Gail Anderson-Dargatz whose book The Spawning Grounds was voted number one favourite adult fiction for September by Canadian librarians. Rooted in the Thompson-Shuswap region of British Columbia, The Spawning Grounds tells the story of a troubled family, a torn nation, and a dying river.